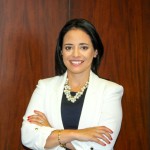 Arabella Gonzales Netto is already an accomplished and distinguished corporate and financial lawyer in Lima. She has been practicing law for over 10 years and has acted as the legal adviser for various corporate entities as an external advisor or in-house lawyer. She is currently the General Counsel of MIGIVA Group, an important group of companies in Peru in sectors such as agriculture, aquaculture, navy, construction, and others. Her expertise lies in corporate and financial issues, mergers and acquisitions and contracts.

Arabella has plenty of experience in creating and directing legal areas of companies, especially for family economics groups, as MIGIVA Group (current employer), previous jobs such as Grupo Sarfaty and Grupo Wiese. She also has experience in important law firms in Peru and as an independent legal adviser. In her last previous experience, Grupo Wiese, Arabella had gained a number of important responsibilities, worked on multiple vital transactions and had become a reliable and commercially focused counsel who is indispensable for the consolidated economic group Grupo Wiese’s business operation. The aforementioned transactions include the restructuring of the group, important M&A deals, and assuming the representation of the companies of the group with stocks listed on the Stock Exchange of Lima. These achievements have come at a time of change within the company, including the company’s CEO role changing hands in 2016 and a consequent new strategy and structure for the firm. Arabella actively participated in the development and implementation of these plans, including the sale of Seguros Sura e Hipotecaria Sura, jointly with Grupo Sura, to Intercorp Group, which she states was one of Peru’s main economic transactions of 2017 and one that required almost a year of development of strategy, negotiation and implementation. Further proving her worth in the company’s growing business portfolio, she was critical to the acquisition of a minority stock of holding culinary company Civitano, the acquisition of ordinary shares in the seed financing round of the Peruvian startup, Juntoz.com, and a joint investment agreement in a new company constituted together with Frialsa Group Mexico, the sale of minority percentage of Sura Asset Management shares to Grupo SURA, and the sale of 50% stake of the Wiese Group in Panamericana Real Estate (Malls MEGAPLAZA) to Parque Arauco. For Grupo Wiese, 2017 was ‘the year of redefinition of the group strategy and structure’, and Arabella held a ‘main role’ in several aspects of this change. She was central to a number of initiatives, including the review of a more efficient structure of the holding companies for future exit transactions, the structuration and constitution of public investment funds (including a ‘FIRBI’), of a private equity fund to consolidate all new investments of the group, and the transfer of all the staff and operations of the group. Arabella also assisted with the constitution and stock market listing of four new holding companies of the group, gave advice and participated in the projects of risk management, the formalization of procedures, manuals and politics, and the implementation of a compliance system and adjustment of the company to standards of best practices. A source had the following to say of Arabella’s attributes: ‘During these challenging years, Arabella has shown a lot of hard and soft skills to manage in excellent manner all the internal and external challenges for her employers’.

Arabella completed her Master’s Degree in Finance and Corporate Law from ESAN University in 2015. She started out her education completing her Bachelor’s degree in Law at The Catholic University of Peru. She is also a Member of The Bar Association of Lima and The Women in the Profession Peru (WIP Peru).

In the last years, Arabella was distinguished for Legal500 publication in two opportunities: (i) named between the 100 General Counsel Powerlist in Peru for 2018, and (ii) the consideration of the legal team lead by Arabella between the list of GC Powerlist Peru Teams for 2019.

In her spare time, Arabella enjoys going to the movies and working out at the gym.

Worldwide Association of Female Professionals Member, Arabella Gonzales Netto, can be found on the Association Directory, where she is looking forward to networking with you.