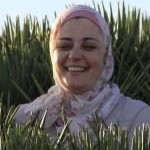 Haifa Abedalhaleem joined International Union for Conservation of Nature (IUCN) in July 2007, rising through the ranks to eventually become the Protected Areas Programme TABE’A Programme Coordinator. TABE’A Programme has been the main focal point for IUCN’s work on World Heritage in the Arab States since 2011.  Haifa has developed and managed the IUCN’s TABE’A Programme,  hosted and implemented by the  UNESCO-a recognized second Category Centre the Arab Regional Centre for World Heritage (ARC-WH) based in Bahrain.

TABE’A is part of IUCN’s global World Heritage Programme and involves coordination with all IUCN regional and country offices in the Arab region, and with the State Parties and other World Heritage actors in the region. Haifaa has co-authored two IUCN reports in 2011 and 2015, which are the basis for the TABE’A programme and mobilize regional efforts and collaboration on World Heritage in the Arab States. She has also contributed to a range of other technical publications and studies.

She is very passionate about her work, and is highly knowledgeable in the areas of non-profits, budgeting, and planning. She is looking forward to sharing her expertise and connecting to like-minded women.

International Society of Female Professionals Member, Haifa Abedalhaleem, can be found on the Association Directory, where she is looking forward to networking with you.