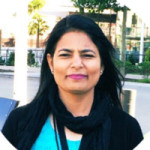 Tabinda Naeem is a Broadcast Journalist for Voice of America. A 48- year old media professional and television journalist, she has a keen understanding and interest in world cultures and languages. After spending 20 years in broadcast journalism, she is at a crossroads and looking into exploring new avenues for her creative and journalistic passions. She is keenly interested in expanding her horizon into film making and visual storytelling with special focus on telling stories of women by women.

Voice of America Urdu Service is based in VOA’s Washington DC headquarters. Tabinda has covered every aspect of news and current affairs from Lahore to Dubai, to London & to Washington DC. From 2006 to present, Tabinda has played a key role in the planning, conceptualization and coverage of VOA Urdu broadcasts for TV and multimedia platforms. As a television journalist, she was part of the exclusive coverage team, which covered the US Elections 2008, 2012 and 2016 from the campaign trails of the Bush, Obama and the Trump Presidencies.

Tabinda is one of the founding team members of Pakistan’s first 24/7 private news channel Geo News. From June 2002 until December 2005, Tabinda covered all major news events from Pakistan to London, such as the referendum of President Pervez Musharraf in 2002, Pakistan’s National Elections in August 2002, 2005 earthquake in Pakistani Administered Kashmir and the national elections in United Kingdom in 2005 along with many other human interest stories in Lahore and London.

Her Documentary style visual reports include 25- minute duration special features such as: The Case for Pakistan – US Pakistan relations from the lens of US think tanks, Pakistan’s Education Landscape and the role of US financial Assistance, Domestic Violence in Immigrant communities of United States, Islamophobia, and more than 2000 TV reports and features for VOA Urdu and Geo News combined.

Tabinda Naeem has a passion for learning new languages. She is proficient is Urdu, Hindi and English language. Currently, she is learning Turkish language from Washington DC’s Yunus Emre Institute.

International Society of Female Professionals Member, Tabinda Naeem, can be found on the Association Directory, where she is looking forward to networking with you.