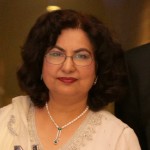 Qaisra Shahraz is a celebrated author, educationist, activist and cultural leader. As the founder and executive director of the Muslim Arts and Culture Festival (MACFESTUK), she leads an international initiative dedicated to fostering peace, community engagement, cultural exchange, and challenging stereotypes. The organization and its leadership have won numerous awards and accolades, including The Queen’s Award for Voluntary Services and the High Sheriff Award and the British Muslim Award, under the category of Leading Lights of the Year.

Also an award-winning novelist and screenwriter, Qaisra was recipient of the prestigious National Diversity, Lifetime Achiever Award for services to ‘Literature, Education, Gender and Interfaith Relationships’ (2016). In 2018, her alma mater the University of Salford, presented her with the Alumni Achievement Award for having achieved distinction in her multiple careers and for contributions to the arts and community cohesion. In 2022 she gained an MBE, Queen’s Honour award for ‘Services to Gender Equality and Cultural Learning’. Most recently, in 2021 she won the She Inspires Award in the Culture Champion category.

Originally from Pakistan, Qaisra received her bachelor’s degree (Hons) in English Language and Literature and Classical Civilizations from the University of Manchester. She attended Manchester Polytechnic to receive postgraduate certification in Education, received a diploma in Islamic Studies from the Manchester Metropolitan University, and holds a Master of Arts in English and European Literature, as well as a Master of Arts in Television and Radio Scripting from the University of Salford.

Passionate about women’s rights and human rights, Qaisra’s multifaceted career has uplifted her values and engaged the community on local and international levels. Last year, to celebrate Muslim women and to challenge stereotypes about them, she set up the new organization Muslim Women’s Arts Foundation and its festival. She was ranked number 1 in a list of the 50 Most Influential Women in Manchester, and noted as one of 100 Influential Pakistani Women in the Pakistan Power 100 List, and included in the Muslim Power 100 list. Her books have been translated into several languages, studied at universities, and have ranked on bestseller lists in Indonesia for the past 15 years.

Qaisra is a Fellow of the Royal Society of Arts, a literary judge, an Executive Member and Trustee of the Manchester Muslim-Jewish Forum, We Stand Together, Manchester Young Lives, an ambassador for Poverty Alleviation Scholarships (PAS) and a UK partner with New York’s Foundation for Ethnic Understanding. She has also enjoyed a successful career in education as an Ofsted inspector, a quality manager, assessor, education consultant and international teacher trainer. She credits her success to focus, drive and perseverance.

International Society of Female Professionals Member Qaisra Shahraz, MBE, FRSA can be found on the Association Directory, where she is looking forward to networking with you.