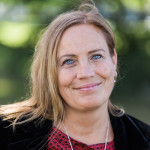 Nina Tegar began her career in special education and is currently a professional publisher in Sweden. She publishes novels and other books on leadership in Swedish. She also loves to write, herself, and is an instructor and coach, and looks forward to networking and collaborating with likeminded professionals.

One of their most recent books released “Sensitive Leadership: meet the new way to lead in twelve interviews” is in Swedish and is about being a more empathetic and responsive leader or manager than what counts as a traditional manager, written by the Swedish journalist Pia Rockström.

Nina holds a master’s degree in Special Education from Umeå University (2013), and a postgraduate degree in Literature from Nordic Folk University (2005). In 2010 she was awarded by the Stockholm Social Responsibility Community for teaching autistic children to read. In her spare time, Nina enjoys writing and exercise. She speaks fluent English and Swedish.

International Society of Female Professionals Member Nina Tegar can be found on the Association Directory, where she is looking forward to networking with you.