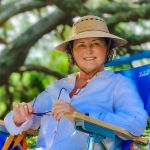 Marie Goff, Brig. Gen. USA Ret. began her career as a writer, photographer, and public speaker after serving for more than 37 years in the military.

Marie’s travel stories and images have appeared in online publications such as Military Living, Adventuress Travel Magazine, Triptipedia, and The Southern Edge Magazine.

Marie publishes travel and human-interest stories and images as a freelance writer, photographer, and public speaker. She also publishes blogs and gallery images on her website and social media at Travel Notes and Storytelling. She is married to Eddie Goff, Colonel, USA Ret.

International Society of Female Professionals Member, Marie Goff, Brig. Gen. USA Ret., can be found on the Association Directory, where she is looking forward to networking with you.