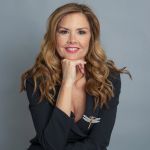 Marci Hopkins is an award-winning TV host, on-air personality, creative executive and author. As Executive Producer and Host of the popular morning show Wake Up with Marci, she shares stories of triumph and transformation, celebrity inspiration, hopeful stories, and candid conversations to help viewers gain new insight and perspective to live their happiest lives. The show airs on CBS-owned WLNY-TV 10/55 at 10 AM EST on Saturdays, and can also be found on Hulu Live, YouTube and major Podcast Platforms.

Marci also authored the book, Chaos to Clarity: Seeing the Signs and Breaking the Cycles, which helps readers identify harmful patterns and behaviors in their lives and pave a new path to recovery. The book offers a healing guide with an educational approach, giving readers the tools and hope to take themselves out of pain and into love.

Driven by a desire to help others in all that she undertakes, Marci shines a light on hardships and transformation, empowering viewers and readers to break free of dysfunctional generational cycles and step into their power. She consults with experts and people who have experienced the extraordinary, and she herself is also the living testament to the power of transformation, having achieved sobriety and winning her battle over alcoholism.

Marci holds a bachelor’s degree in Music and Television Business from The Art Institutes and serves on the board of the YWCA. Originally from Texas, she moved to Los Angeles, where she became Director of On-Air Promotions for FX Network, before ultimately settling in New Jersey with her husband and two children.

Outside of her professional endeavors, Marci is devoted to charity work, serving on the committee of Julia’s Butterfly Foundation, and fundraising for the Kumali Organization and SWS Organization.

International Society of Female Professionals Member Marci Hopkins can be found on the Association Directory, where she is looking forward to networking with you.