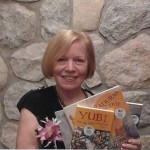 Georgia Hunter is a multi-talented and gifted visual artist working in a variety of mediums. Her sculptures have gained recognition, including ‘Gentle Affection,’ which won Best of the Show for Sculpture in an Alberta province-wide show. In 2002 her sculpture ‘Salmon’ won honorary mention at the Seymour Art Gallery and in 2004 her sculpture ‘Lessons from Geese’ won The Delta Arts Council award for three-dimensional work. Most recently, she has been involved in public art street banners for the city of Vancouver and her sculpture ‘Salmon’ was short-listed in the city of Vancouver Public Art Competition.

After earning a fine arts degree from the University of British Columbia, Georgia went on to complete further studies in sculpture at the University of Lethbridge and in Visual Communications at Medicine Hat College. She received the Board of Governors’ Award for Art and was twice awarded a bursary for high grade point average for Visual Communications.

In addition to her artwork, Georgia is a published author of children’s books. Today, she resides in North Vancouver, British Columbia, where she loves living in harmony with the surrounding forest.

International Society of Female Professionals Member Georgia Hunter can be found on the Association Directory, where she is looking forward to networking with you.