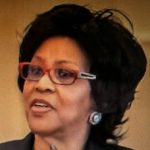 Dr. Jayne Roberts-Stinson is the founder and co-owner of Stinson & Associates, Inc. She began her professional career in the field of vocational rehabilitation as a result of early years of growth and development, as well as learning the importance of making a difference in the lives of individuals with challenges. An early lesson Jayne recalls was ‘stand up to be seen, speak out to be heard and sit down to be appreciated.

After obtaining her undergraduate degree, she was employed as a Director of a Model Cities Project with the Bobby Dodd Rehabilitation Center, a facility designed to provide employment opportunities for individuals identified as intellectually challenged. Jayne saw these individuals as not being able to stand up, speak out and be appreciated; it was therefore this reality that drove her to expand their opportunities and develop the resources necessary for their survival.  The organization saw potential and passion in Jayne and as a result she was able to rapidly advance in the organization. While rising through the ranks, she has held the following positions: Social Service Coordinator, Director of the Geran Denny work activity program, and Director of Rehabilitation Services.

The family; Bill, Jayne and daughter Deanna, relocated to West Virginia, and Jayne was employed with the Eastern Panhandle Regional Commission as the Aging Service Coordinator.  Additionally, she worked as a research coordinator for ABT Associate a research firm that collected data relative to the Title I schools in West Virginia. Her husband Bill transitioned in 1976 and she and Deanna returned to Georgia. Jayne was fortunate enough to return to a position previously held at the Bobby Dodd Rehabilitation Center as Director of Rehabilitation Services.

Jayne branched out to expand her horizon by accepting a position with Hampton Associates to direct the Private Industry Councils enrollment center for the City of Atlanta.  Returning to employment where her heart was, she accepted employment as the director of Rehabilitation Services at the Roosevelt Warm Springs Institute for the Georgia Department of Human Services, Director of the Georgia Traumatic Brain Injury Center and Regional Director of Region 3 for rehabilitation services.

After years of employment directing programs and managing projects for others, the idea to establish her own business was birthed from those experiences. This resulted in her venturing out and establishing J. Stinson & Associates, Inc.  After years of operating as J. Stinson & Associates her daughter Deanna joined her in business and the company became Stinson & Associates, Inc. Deena and Jayne are business partners. The company is a community-based for profit operation designed to provide employment preparation, job development/placement, job coaching, customized and traditional supported employment, job readiness, work readiness, and Pre-ETS training opportunities for individuals physically, emotional and intellectually challenged.

Jayne has been described as a fire starter- meaning she develops ideas, plans, programs and different initiatives and once they are started she is off to something else.  Jayne indicates Stinson & Associates is her driving force and became her lasting what’s next. Stinson & Associates was incorporated in 1999 and continues to pump the motivation and purpose for every day’s Things To Do List”!

Jayne’s educational pursuits led her to the obtainment of a Bachelor’s Degree in Sociology, a Master’s Degree in Rehabilitation, and Public Administration as well as a Doctoral Degree in Public Administration. Jayne indicates the degrees obtained do not qualify her but rather affords the vehicles for the degree to which she makes a difference in the lives of those individuals challenged with inclusion in the stated cultural norms of society.

The lesson learned early in her development years in the Northeast Georgia Mountains is still a guiding force; Stand up to be seen, Speak out to be heard and Sit down to be appreciated.

International Society of Female Professionals Member, Dr. Jayne Roberts-Stinson, can be found on the Association Directory, where she is looking forward to networking with you.