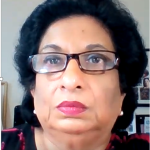 Anjalika Silva’s background includes a mix of Bioscience, Management and Technology Management combined into a special area that includes technical writing, Human Resources and Benefits.  These areas of knowledge and experience were applied to Scientific Society Program Management in technical employment opportunities with scientific employers, and promotion of science education.  Her work involved being liaison to committees that brought significant contributions from the corporate and academic areas with input into steering scientific programs that drew the attention of Canadian and Singaporean scientific communities in addition to the United States.

In retirement she is focusing on writing for various purposes that includes technical writing and in promoting other areas that builds bridges between her country-of-origin Sri Lanka and the United States. The many areas of interest include promoting cultural understanding Peace and Unity among people through an initiative that is a Sri Lankan American Action Coalition bringing together intellectuals in varied areas of expertise giving their effort voluntarily as a team. Her career was focused mainly in the Washington DC area in scientific and technology environments and the voluntary work continues in serving needs beyond boundaries.

After earning a Bachelor of Science (Hons) in Biological Science at the University of Sri Lanka (Kelaniya Campus), Anjalika went on to complete a Master of Science in Technology Management from the University of Maryland Global Campus. She has worked on a broad array of projects and assignments throughout her career.

Anjalika spent over a decade as Senior Staff Associate of the American Chemical Society, managed US Operations for a Dutch Company Pharming Healthcare (Netherlands) based in the USA, Managed HR and Benefits in the pre IPO MacroGenics in setting up the infrastructure of a startup company in addition to special projects at the NIH, Westat, MedImmune combining science with technology skills. She credits her success to focus, passion and perseverance and commitment to hard work on a foundation of solid education she received before arriving in the USA as an immigrant.

In a voluntary role in the community, she served on the Board of Directors of the Sri Lanka Association of Washington DC as President, Vice Patron and later functioned for many years on the Advisory Board promoting cultural and educational projects.  As a part of her volunteer service, she was involved in fundraising for English Teaching Camps in Sri Lanka with a member of the Peace Corps and also provided help to the Children’s Heart Project.

In the area of music, she provided performances for the Asian Heritage celebrations since 2010 and was invited to render the US national Anthem in the celebration of the AAPI communities.  The venues varied from the Department of Transportation, USDA, Library of Congress, Kennedy Center, National Archives, and the Smithsonian among others as a musician.

She volunteered for over eight years at a Senior facility in Maryland playing piano for seniors who were confined in their residential facility.  Assisted in bead jewelry making for seniors as an occupational class.

A recreational activity of a hobby in jewelry making developed it into a small business making original designs of jewelry currently http://www.simpleandelegantbeads.com  some of which are donated for various charities.

Provided support to services of the Indian American Catholic Association (IACA) and the Catholic community among Sri Lankan Americans as a soloist for annual pilgrimage services held at the Basilica in Washington for about 20 years.

Helped many destitute families affected by Covid with job loss both in the USA and in Sri Lanka throughout the north and south of the country.

International Society of Female Professionals Member Anjalika Silva can be found on the Association Directory, where she is looking forward to networking with you.