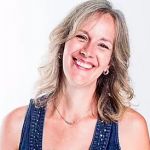 Angela C. David is currently the Head of Performing Arts Drama/Theater Teacher for The Inter-community School in Zurich, Switzerland. She has been in this role for nearly 8 years and has been a Teacher and Trainer in the Performing Arts Internationally for nearly 20 years.

Offering experience from all over the world, Angela has also worked in Lima Peru for nearly 6 years at The Franklin Delano Roosevelt College (American School) as The Arts Director. Her areas of expertise are in Theater and Dramatic Arts. She is originally from Canada and has worked for The Upper Canada College as teacher, Examiner and Arts Administrator.

She holds a Masters of Education (July 2004), Bachelors of Education (1986-1991), and Secondary Arts Education (Drama, Literature). She is educated in management and skilled in stage direction, dramatic arts, theory, and design. As a skilled classroom educator, she specializes in setting course curriculum, lesson planning, and educational technology. She has taught musical theater, acting techniques, theater direction and diction, and History of Theater. She is an international professional and speaks English, German, Spanish, and French.

International Society of Female Professionals Member, Angela C. David, can be found on the Association Directory, where she is looking forward to networking with you.