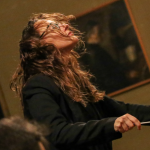 Alicia Galli is a celebrated conductor, composer and music arranger based in Italy. Having served as Assistant Conductor to M° Acocella for many productions, such as Donizetti’s Maria Stuarda at Opéra Grand Avignon theatre in Avignon, Donizetti’s Don Pasquale at the Opéra de Rouen theatre (France – 2014) and Rossini’s Adelaide di Borgogna at Festival Rossini in Wildbad, she has met and worked with great artists such as Patrizia Ciofi, Karine Deshayez, Michele Pertusi, Ismael Jordi and Juliane Banse.

Alicia graduated with honors from Conservatorio di Musica G. B. Martini (Bologna, Italy) in Orchestra Conducting and Composition and was awarded a scholarship for the best Conducting student (A. Gigli and I. S. Tomboli award). She also attended Accademia Chigiana in Siena with M° Daniele Gatti and M° Luciano Acocella and International Masterclasses in Berlin with M° Lior Shambadal.

Alicia composed and conducted the original soundtrack for Margherita Ferri’s Zen In The Ice Rift, which premiered at the 2018 Venice Film Festival. She won the Magone Prize in 2017 and the Zucchelli Prize in 2018 for her compositions, and the Rotary Ghirlandina Prize in 2019 for conducting. She is Orchestra dei Castelli Principal Conductor and co-founder and both Orchestra Senzaspine and Orchestra Corelli Principal Guest Conductor. She conducted several ensembles and orchestras such as Orchestra Joic (Tarragona), Berlin Collegium Musicum, Berliner Symphoniker, Euregio Festival Orchestra, OGI (Orchestra Giovanile Italiana), and Filarmonica Gioachino Rossini performing Peter and the wolf starring the renown Italian actor Silvio Orlando as narrator.

International Society of Female Professionals Member Alicia Galli can be found on the Association Directory, where she is looking forward to networking with you.